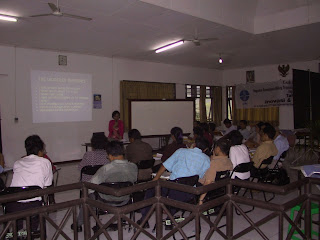 As the technology evolved, communication protocol also had to evolve; for example, Thomas Edison had to discover that hello was the least ambiguous greeting by voice over a distance; previous greetings such as hail tended to be lost or garbled in the transmission.

As regards human communication these diverse fields can be divided into those which cultivate a thoughtful exchange between a small number of people (debate, talk radio, e-mail, personal letters) on the one hand; and those which disseminate broadly a simple message (Public relations, television, cinema).

Our indebtedness to the Romans in the field of communication does not end with the Latin root "communicare". They devised what might be described as the first real mail or postal system in order to centralize control of the empire from Rome. This allowed Rome to gather knowledge about events in its many widespread provinces.

As the Romans well knew, communication is as much about taking in towards the centre as it is about putting out towards the extremes. Thus peace is a side-effect of communication, starting, for example, when the August 30th 1963 communication hotline between U.S. and Soviet leaders went into operation.

In virtual management an important issue is computer-mediated communication.

The view people take toward communication is changing, as new technologies change the way they communicate and organize. In fact, it is the changing technology of communication that tends to make the most frequent and widespread changes in a society. The latest trend in communication, decentralized personal networking, is termed smartmobbing.
Posted by nilianv at 9:05 PM No comments:

Here is another anime I recommend. The plot is basically another good guys v.s. bad guys to save the world kind of thing. What I really like about this anime is the character designs, its practically random with every episode. You have talking globs, some weird insect/dog/fish kind of animal with a unicorn horn nose, talking penguins that saypoyo, demons, trolls, and much more. Of course the storyline is interesting as well, Haru Glory with his friends Elie, Musica, Plue, Griff, and more as the story goes on, goes out into the world to save it from Demon Card. Demon Card is a organization bent on taking on taking over the world with incredible weapons called dark brings (db for short) that allow anything that wields it the power to do something they could not normally do like making your body out of steel, make bombs out of nowhere, bring down gravity on someone or more. But Haru is able to counteract Demon Cards db with his own weapon, the decaforce sword, a sword that can change into 10 different forms that allow it to do incredible things like create an explosion on impact, make you as light as air to increase your speed over 10X, and more. You could even combine the explosions and speed to make a blitzkrieg bombardment. I really like the anime, but I like the manga more.

You want to know something interesting? The manga and anime artist, Hiro Mashima, has the same birthday as me, May 3rd. It is so awesome. The story is interesting as there are many parts you would not deem part of the story but more along sub-stories, but are equally as interesting as the main story. Plue is so ummm..interesting lol...he is one of my favorite characters in Rave master. I would recommend this anime and manga for people to get an interest in as it is a crazy adventure to keep you wanting the next one.
Posted by nilianv at 8:25 AM No comments:

I know many of you out there are Naruto fans, especially with the release of Naruto in America. But are there really such a thing as ninjas out there in the real world? There is and I will show you some clips of them in action. These guys are crazy, especially the first vid which is one of my all time favorite vids. I could never imagine someone doing this in real life. Want to know something? They don't even live in Japan, its all in the U.S. Unfortunately their site seems to be gone now, it was pretty cool as they would post clips and pics of their gravity defying moves all over the city. Enjoy
Posted by nilianv at 7:55 AM No comments:

Wow this was interesting, apparently there are big enough Suzumiya Haruhi fans around and they decided to dance the dance seen in the anime. Besides a couple flaws like the fall at the end, this vid was actually pretty well done.
Posted by nilianv at 8:28 AM No comments:

A look at an Otaku's Room

Sorry for the late post, internet problems again. But your wait was well worth it because of this post. Well many of you probably think that I have a room full of otaku related items, you are half right, my room has otaku related items but its not full of it. Many otaku items, especially figures that I collect come in the range of $60-$120, so I try to limit myself if I can and my room is completely barren compared to others I've seen. I have a few posters, gundam models, figures, etc. My manga collection is the only thing in excess as I am starting to run out of room to place them. Now be ready to oooh, ahhh, fear, or laugh at my otaku room.
Posted by nilianv at 8:17 AM No comments:

Hey all you anime fans out there, if you haven't seen Cowboy Bebop then you haven't seen anime. Cowboy Bebop is basically about bounty hunters in space on the constant lookout for some quick cash that leads them to trouble, intrigue, and a whole lot of comedy. But there is a number of seriousness in the anime, especially towards the end of the series, 26 episodes total. You have Spike Spiegel, named possibly due to his hair or his attitude that goes up and down like spikes in my opinion, who has died but has since been revived, weird huh. He's a cool guy and he's quick with the pistol and his mouth. Then you got Jet Black, no not the American actor, who has a mechanical that he can use to crush heads under his armpit which adds to his deadliness. Cool and quick thinking, he tries to get a profit as long as it doesn't result in it going negative. Faye Valentine next, a sly hotty in the anime that seems to get anything she wants to pay off her gigantic debt. Radical Edward next, who is actually a girl, that has given herself the name Edward Wong Hau Pepelu Tivrusky IV, even though she is the first and probably the only one with that name. Ed is a genius who can hack into any computer and get what she wants and loves to have fun over anything else. Then comes Ein, probably the most underrated character of all, probably because he's a dog, a Pembroke welsh corgi to be specific. But he's no ordinary dog, he has an Einstein equivalent mind (hence the name Ein, short for Einstein, who has gotten the crew out of some predicaments.

A must watch anime, good replay value for some of the episodes, great art, great music (especially the opening theme song as shown above), great characters that people can relate to, and something every anime fan should know about.

Spike, check out the hair
Posted by nilianv at 8:08 AM No comments: